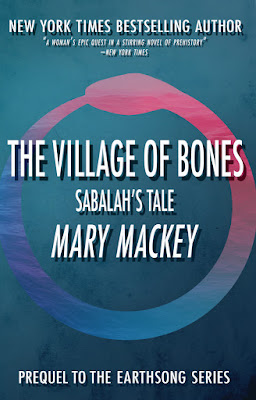 Introduction:
“Mary Mackey’s The Village of Bones, gives us the vivid adventures of The Clan of the Cave Bear, the magic of The Mists of Avalon and Lord of the Rings, and the beauty of Avatar. Filled with the belief that love drives out fear, it contains stunning twists that will leave you wanting more.”
—Dorothy Hearst, author of the Wolf Chronicles

A perilous journey, a stunning prophecy, a dangerous love that could destroy humankind: In 4386 B.C., a young priestess named Sabalah conceives a magical child with a mysterious stranger named Arash. Sabalah names the child Marrah. This child will save the Goddess-worshiping people of Europe from marauding nomad invaders called “Beastmen,” but only if her mother can keep her alive long enough to grow up. Warned by the Goddess in a vision of the coming invasion, Sabalah flees west with Arash to save her baby daughter, only to discover that she is running into the arms of her worst enemies.

The Village of Bones is the prequel to Mary Mackey’s best selling Earth Song Trilogy (The Year The Horses Came, The Horses at the Gate, and The Fires of Spring). Meticulously researched, this prize winning novel tells the story of the original dark-skinned Goddess-worshiping peoples of Neolithic Europe as they fight for survival against blond-haired, blue-eyed nomad invaders from the steppes. Basing her plot on the extensive archaeological research of UCLA Professor Marija Gimbutas, Mackey brings to life one of the most important turning points in human pre-history.

When asked why the following excerpt was not included in the published version of The Village of Bones, Mackey said, "The excerpt I sent was the original prologue. I decided not to include it in the published version because I wanted an active opening for the novel, one that didn't involve a retrospective telling of the story. In Chapter One of the published version, Sabalah is caught in a small boat in a fierce storm and sees the Amonah, the Goddess of the Sea, walking across the waves to rescue her. Amonah saves Sabalah from drowning and tells Sabalah she will bear a magical girl child who will save the Mother people from the invading nomads."

Follow my song map, I commanded Marrah when she came to me for that last embrace. Avoid lakes when you can.But I did not tell her why she should fear lakes, because at the time I could not remember, and the beastmen were terrible enough.
Now as I here sit beside this dying fire on the edge of this cold, gray sea, I fear I have sent my beloved daughter into more danger than either of us could have ever imagined. In my hands I hold a page of the sacred Mother Book. Three months after Marrah was born, the Great Python of Orefi gave the Book to me. In it, all things past, present, and future are written. It’s a book of riddles, warnings, prophecies, hard to interpret since it often predicts things that will not happen for thousands of generations or mentions things that happened thousands of generations in the past. Sometimes I am able to understand the warnings it contains, but that understanding always comes too late to do me any good.
Make no mistake about it: a book of prophecy is a cruel thing.  If I were well, I would go on struggling to unravel its riddles, but I am gravely ill. Two weeks ago, I stepped on a thorn. The wound has become infected, and now each evening, fever rises from my foot to my head like a merciless hawk, shuddering through my body and carrying me into a world of dreams and hallucinations. Worst of all, the fever has brought back memories of my own past so terrible that I sometimes secretly long for the peace of death.  Only last night, I imagined I heard the voice of the Dark Goddess whispering that She is coming to take me back into Her womb to sleep with my ancestors. Yet this morning, I woke alive; so my time must not yet have come.
This afternoon, the sun only begun to fall into the sea, yet already my hands have started to shake. So before it is too late, I will dip my quill into ink made of bitter gall and scratch black, bird-like tracks at the bottom of this page of the Mother Book using a sacred script that only those whom the Goddess has chosen can read. My warning will be short. Two lines only:
Marrah, my beloved child, beware!
There are things that are not human out there!
Then, if the Goddess in her infinite mercy spares me, I will make a book of my own. I will fashion its pages from velum, white as the cliffs, pure as a morning sky. On them I will write the story of my life—the true story that I have only just now remembered—so that someday Marrah can read it and know how much I loved her as a baby, and how hard I fought to keep her alive long enough to become a woman.

Mary Mackey became a writer by running high fevers, tramping through tropical jungles, dodging machine gun fire, being swarmed by army ants, making catastrophic decisions about men, and reading. Her published works consist of fourteen novels including The Village of Bones, which won a 2018 CIIS Women’s Spirituality Book Award from the Department of Diversity and Inclusion; The Year The Horses Came; and A Grand Passion, which was translated into 12 foreign languages and made The New York Times and San Francisco Chronicle best seller lists. She is also the author of eight collections of poetry including Sugar Zone, which won the 2012 PEN Oakland Josephine Miles Award; and The Jaguars That Prowl Our Dreams, which won the 2019 Eric Hoffer Award for the Best Book Published by a Small Press. Her work has been praised by Wendell Berry, Pat Conroy, Jane Hirshfield, D. Nurkse, Al Young, Maxine Hong Kingston, and Marge Piercy for its beauty, precision, originality, and extraordinary range. Professor Emeritus and Former Writer in Residence at California State University, Sacramento, she received her B.A. from Harvard and her PhD from the University of Michigan. Mackey, who presently lives with her husband in northern California, is related through her father’s family to Mark Twain. You can contact her at https://marymackey.com/ and follow her on Twitter @MMackeyAuthor. To be the first to know when she publishes a new novel or collection of poems you can subscribe to her quarterly newsletter at http://eepurl.com/CrLHT